Romania's emergency situations inspectorate said it happened in the port city of Constanta, on the Black Sea.

It said the fire had now been extinguished and all patients evacuated.

At the time of the blaze, there were 113 people being treated at the hospital, 10 in intensive care.

The causes of the fire are not known at the moment, Health Minister Attila Cseke said, adding that an investigation had been opened.

President Klaus Iohannis said in a statement Friday that the Romanian state “has failed in its fundamental mission to protect its citizens”,

“I am horrified by the tragedy that took place this morning at the Infectious Diseases Hospital in Constanta,” he said. “It is a terrible new drama that confirms the deficient infrastructure of the Romanian health system.”

Iohannis said that Romania’s “outdated” health care system has been put under an “unimaginable pressure” by the pandemic. 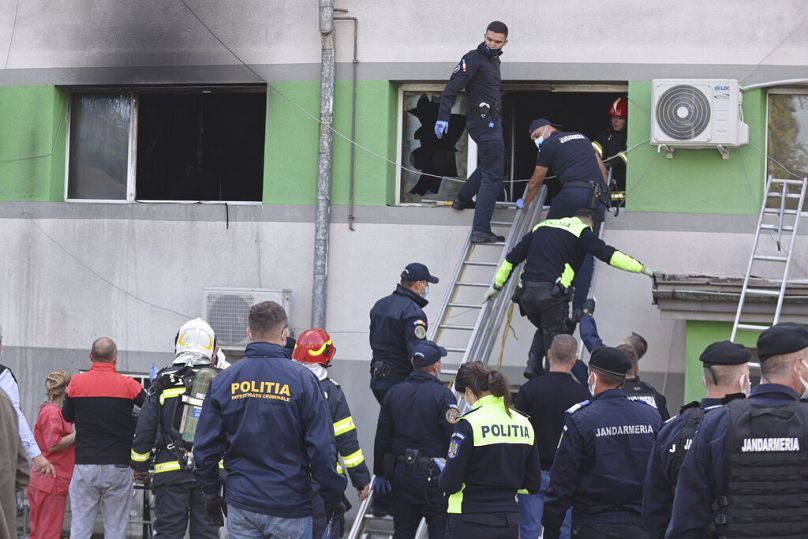 Emergency personnel exit through a window after a fire in the COVID-19 ICU section of the Hospital for Infectious Diseases in ConstantaCredit: AP

Gathered outside the hospital, relatives of the victims accused the authorities of "incompetence".

"History is repeating itself, nothing has been done to improve the conditions in the hospitals," said one woman, claiming that her mother had died in the fire, according to images broadcast live by local television.

The director of the hospital, Stela Halichidis, said that several deficiencies identified in January during an inspection of the electrical and heating installations had been corrected.

The tragedy comes on the back of two other deadly hospital fires within the last year in Romania, raising concerns about the country’s ageing hospital infrastructure.

Last November, 10 people died after a fire tore through an intensive care unit for COVID-19 patients in the northern town of Piatra Neamt. Another blaze in January engulfed a ward at Bucharest’s Matei Bals hospital, killing at least 5 people.

According to experts, less than a third of Romania's 670 hospitals comply with fire standards.

After the Matei Bals fire, President Klaus Iohannis called for urgent and “profound” reform. He said tragedies like it “must not happen again.”

Then in April, three COVID-19 patients in intensive care in Bucharest died after the oxygen supply system failed.

Romania has the lowest spending on health care in the bloc relative to GDP at 5.2%, compared with an EU average of 10%.

Hospitals in the eastern EU member states are facing an onslaught of hospitalisations due to a rapid surge of COVID-19 infections, which is stretching the country’s hospitals to maximum capacity.

Romania on Thursday recorded its highest number of infections since the pandemic started — 12,032 new cases. More than 37,200 people have lost their lives to the disease since the beginning of the pandemic.

The country has the EU's lowest vaccination rate with just 29% of its 19.3 million population now fully inoculated — well below the bloc's average of 62.8%.