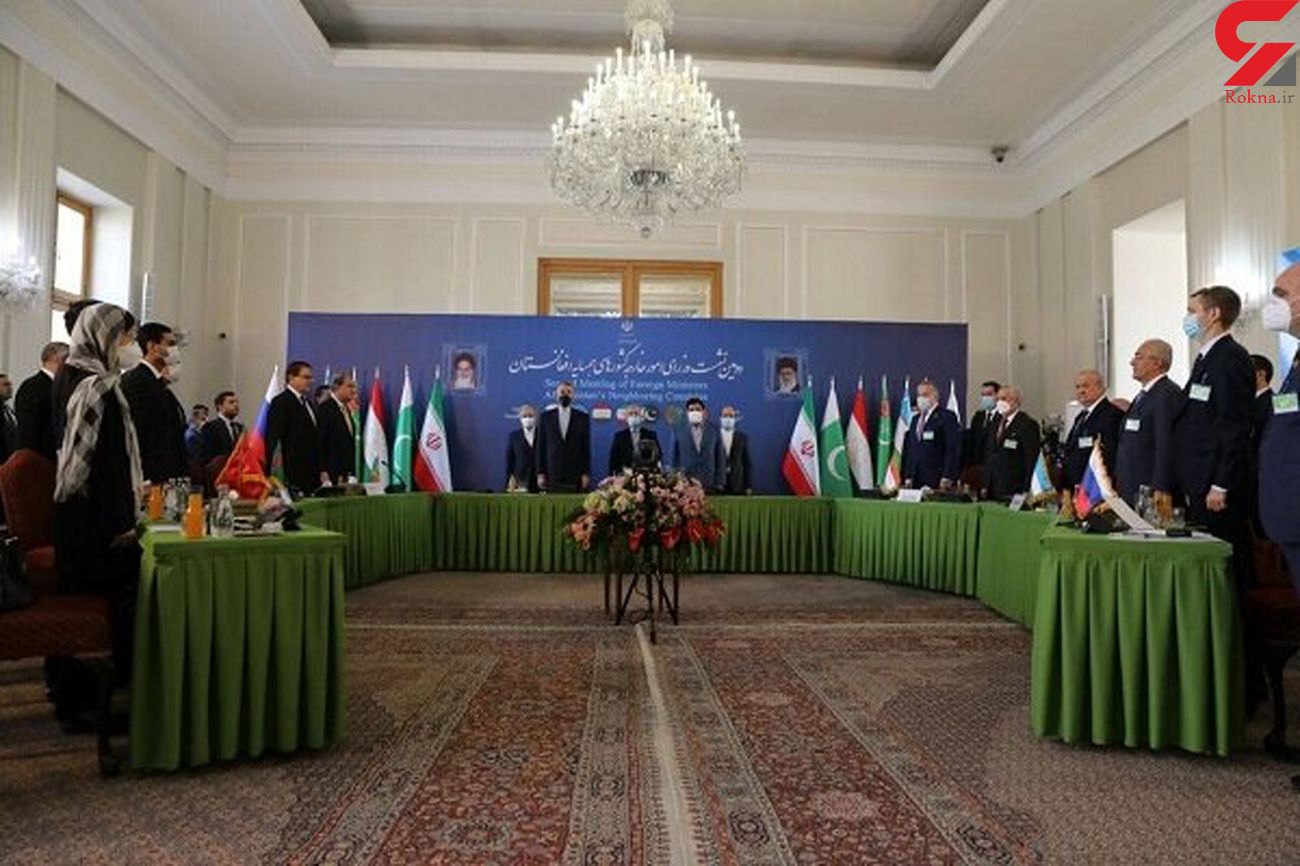 The second meeting of foreign ministers of 6 neighboring countries of Afghanistan plus Russia started with the presence of Iran, Turkmenistan, Tajikistan and Uzbekistan foreign ministers, as well as the Chinese and Russian envoys at the Ministry of Foreign Affairs of the Islamic Republic of Iran.

The Chinese and Russian foreign ministers attend the meeting through videoconference. Ambassadors of foreign countries residing in Tehran also attended the meeting as guests.

The first meeting of Afghanistan's neighboring countries was held online on September 8. Today's meeting in Tehran is focused on ways to facilitate the formation of an inclusive government in Afghanistan. 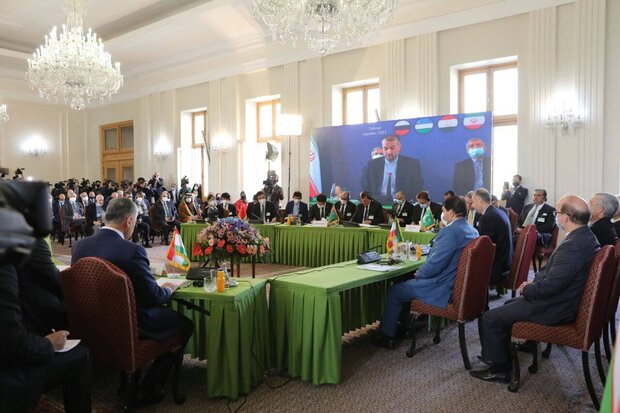 Many of Afghanistan's current problems rooted in foreign intervention

At the beginning of the meeting, Iranian Foreign Minister Hossein Amir-Abdollahian said, "Today's meeting is aimed at focusing on the new situation in Afghanistan. We hope to be able to send a common message to the international community, countries in the region and Afghanistan."

"We support the formation of an inclusive government in Afghanistan," he stressed.

He emphasized that the responsibility for the security of Afghan citizens and borders with neighbors lies primarily with the governing body in Kabul. "We must all help Afghanistan get out of the current crisis."

"Respect for sovereignty, preservation of territorial integrity and non-interference in the affairs of others are among the basic principles of the foreign policy of the Islamic Republic of Iran," the Iranian FM added. "Resolving today's crisis in Afghanistan requires internal cohesion, utilization of all capacities of Afghanistan's neighboring countries."

He went on to say, "We believe that first, all neighbors and, in parallel, the international community should pay special attention to the political and humanitarian situation, as well as the spread of terrorism, drug trafficking, human rights and women in the current situation in Afghanistan."

"Many of Afghanistan's current problems are rooted in foreign intervention, and the United States must accept responsibility for the catastrophes it has caused in Afghanistan over the past two decades," he added.

"In recent months, we have witnessed the increase of the activities of terrorist groups, especially ISIL, in Afghanistan. In recent weeks, it has become clear to all of us that the group has gained operational capabilities in Afghanistan, and the Taliban have not been able to prevent the group from operating in various cities," Amir-Abdollahian said, adding, "The Taliban, as the ruling power in Afghanistan, has an undeniable role in ensuring security and the fight against terrorism, respecting the rights of various groups, including women, providing living necessities for Afghan citizens, respecting ethnic and religious minorities and eradicating the roots of displacement."

He stressed that it is essential for the Taliban to take a friendly approach towards their neighbors and take steps to ensure that there will be no threat from Afghanistan to its neighbors.

Referring to the rapid developments in Afghanistan and the crises left by the foreign occupation in this country, Mokhber said, "The people of Afghanistan expect a secure, independent and developing country."

He noted the people of Afghanistan have been experiencing instability, insecurity, war and bloodshed for more than four decades.

"Two decades ago, the United States and its NATO allies invaded Afghanistan under the pretext of the 9/11 attacks and fighting terrorism," Mokhber said, adding, "But their 20-year military occupation in Afghanistan has resulted in nothing but increased insecurity, extremism, terrorism, economic backwardness and weakening of national cohesion, increasing drug production, and hurting hundreds of thousands of Afghan families." 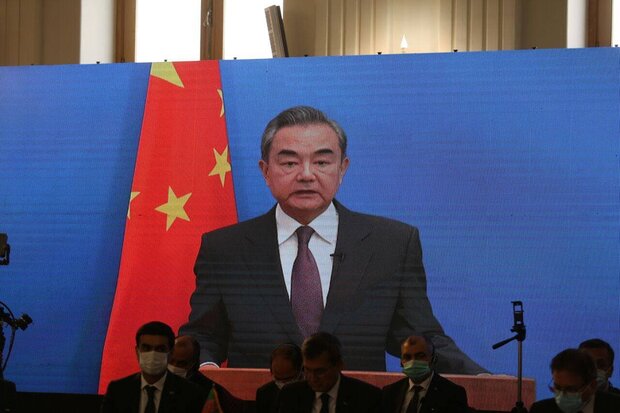 Chinese Foreign Minister Wang Yi who attended the meeting through videoconference, said, "We believe that the second meeting of the foreign ministers of Afghanistan's neighboring countries is being held at a good time, and this will strengthen the diplomatic channels established between us in this regard."

"So far, we have moved in the right direction, and we hope that we can all contribute to peace and stability in Afghanistan," he added. "China has consulted with representatives of various countries on Afghanistan."

"China continues to work with various countries on the issue of Afghanistan to improve the situation in this country so that the Afghan people can have a better life," Wang Yei noted. 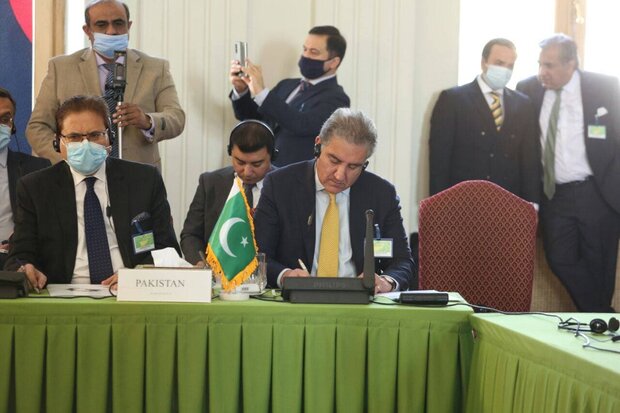 Qureshi also urged the international community to pay attention to the economic situation of Afghanistan to avoid a humanitarian catastrophe.

He said that Afghanistan’s blocked assets in other countries should be released.

Pakistani top diplomat noted that fight against terrorism is vital, adding, “formation of an interim cabinet can pave the way for the formation of an inclusive government representing people of Afghanistan.” 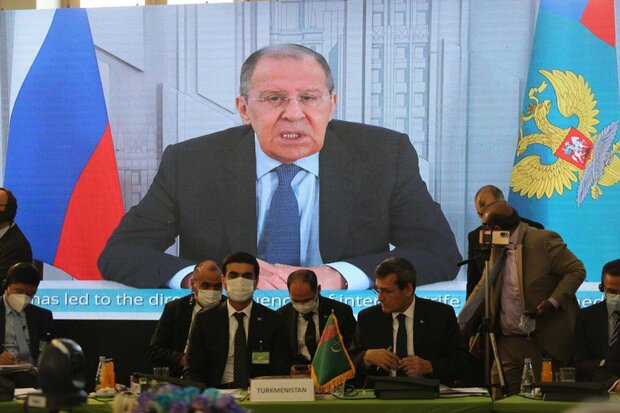 Russia to send food products, medicines to Afghanistan in near future

"We once again call on Afghanistan's neighboring countries to prevent the military presence of the US and NATO on their territory as those plan to move there in light of the troop withdrawal from Afghanistan," he pointed out.

Moscow has consistently advocated the creation of an inclusive government in Afghanistan and has no plans to impose its recommendations on the country, the Russian Foreign Minister said. "Russia is not inclined to impose its advice or recommendations on anyone. Moreover, history itself offers effective ways to solve problems. It's vital to take the interests of the country's major ethnic and political forces into account to the fullest extent possible. This is why we have been firmly and consistently supporting the creation of a truly inclusive Afghan government."

"The people need to be sure that their rights and legitimate aspirations will be implemented through action, not just words, and will also be protected by law, certainly based on respect for local traditions and customs," Lavrov explained.

"Russia is ready to contribute to the joint effort. In the near future, we are planning to send to [our] Afghan partners a batch of humanitarian aid consisting of food products, medicines and basic necessities," the Russian top diplomat said.

Elsewhere in his remarks, he said that terrorists disguised as refugees have been trying to infiltrate neighboring countries. "The current task on the agenda is to ease the effects of and control migration flows from Afghanistan, because terrorist and criminal elements posing as refugees may infiltrate neighboring countries and have already been trying to do so."

"This goal can be achieved only by creating normal conditions in Afghanistan. In the long term this will be a major prerequisite for the gradual return of Afghans to their homes," Lavrov added. 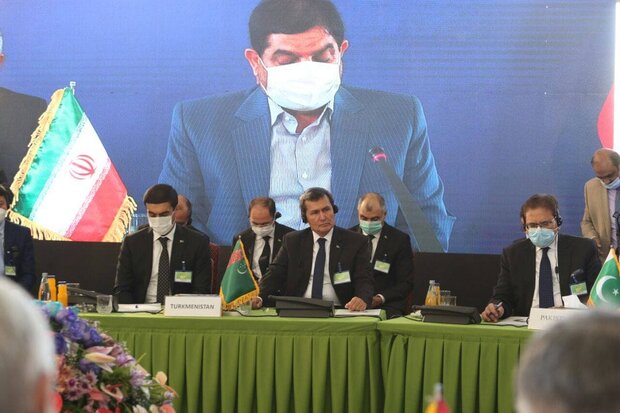 Secure Afghanistan 'right of people of this country'

Stating that a secure and safe Afghanistan is the right of the people of this country, Turkmen Foreign Minister Rashid Meredov said, "We must revive Afghanistan's economy."

"We support talks among all Afghan groups and hope that all ethnicities will be represented in the next government," he added. "We will work with the interim governing body of Afghanistan to achieve this goal." 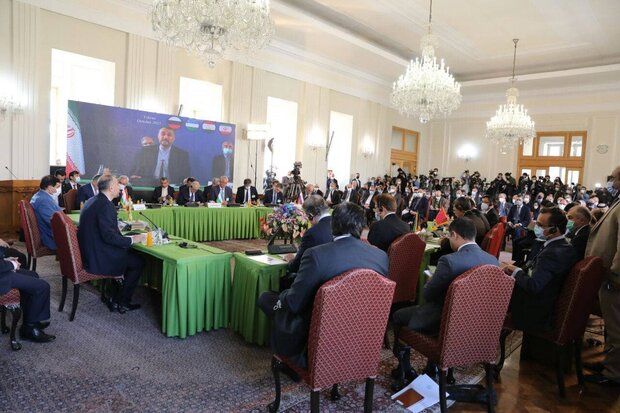 Inclusive government should be formed in Afghanistan

Foreign Minister of Uzbekistan Abdulaziz Kamilov said, "We are ready to help Afghanistan in the field of education and economy, and we also emphasize that an inclusive government should be formed in Afghanistan with the presence of different and ethnic groups in this country."

This item is being updated...