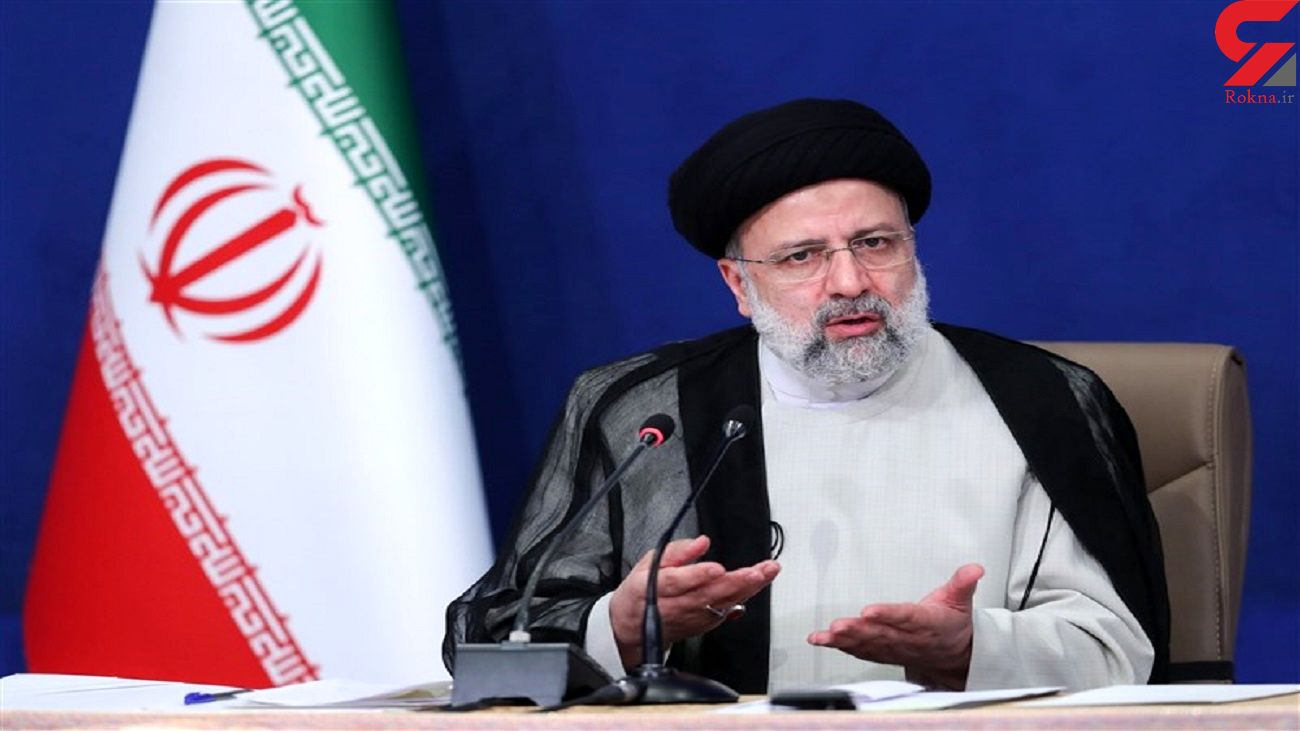 Foreign Ministers of Tajikistan, Uzbekistan, Turkmenistan and Pakistan who have traveled to Tehran to participate in the second meeting of Afghanistan's neighbors, met with Iranian President on Tuesday. 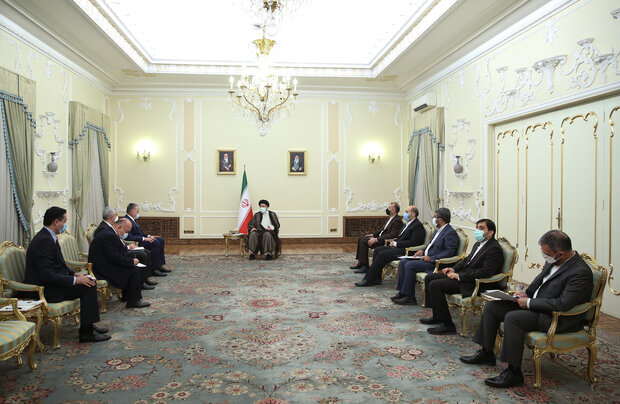 Speaking in a meeting with the Foreign Minister of Tajikistan Sirojiddin Muhriddin on Tuesday night, President Ebrahim Raeisi stated that the two countries and nations have deep historical, religious and cultural commonalities, adding, "We should use these potentials for the development and strengthening of closer relations and cooperation."

Referring to the potential for developing political, economic and cultural relations between Iran and Tajikistan, the President said, "During the recent visit to Tajikistan, a new chapter in bilateral relations began that we should use this opportunity in the interests of the two nations."

The President further stressed the importance of cooperation between neighbouring countries, especially Iran and Tajikistan, to establish peace and stability in Afghanistan, and said, "We seek the formation of an inclusive government, consisting of all ethnic and political groups in Afghanistan."

"There should be an inclusive government in Afghanistan that can ensure the security of Afghanistan and end war, bloodshed and fratricide," he added.

"Terrorist incidents in Afghanistan hurt the heart of every human being and there is no doubt that the Americans are involved in such incidents and do not want the Afghan people to achieve peace and security," the Iranian President said.

Raeisi expressed hope that the meeting of the Foreign Ministers of Afghanistan's neighbouring countries could lead to coordination and joint dialogue in the formation of an inclusive government in Afghanistan.

Tajik Foreign Minister Sirojiddin Muhriddin, for his part, described Raeisi's visit to his country as the beginning of a new chapter in relations between the two countries and said, "We are determined to increase the level of relations and cooperation with Tehran as much as possible and implement the agreements reached".

"Tajikistan believes that Iran's permanent membership in the Shanghai Cooperation Organisation has many benefits and contributes to peace and stability in the region," the Tajik Foreign Minister said.

Referring to Tajikistan's concerns about the situation in Afghanistan, Muhriddin said that a government should be established in Afghanistan that respects all ethnic groups and people of Afghanistan. 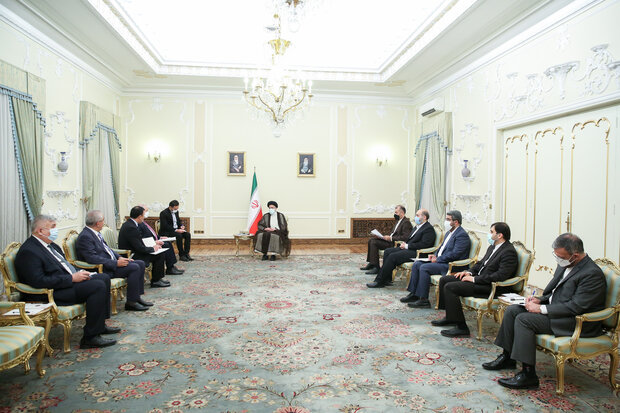 There are no restrictions for expanding ties with Uzbekistan

Speaking in a meeting with the Foreign Minister of Uzbekistan Abdulaziz Kamilov, President Ebrahim Raeisi referred to the commonalities and capacities of cooperation between Tehran and Tashkent, saying, "Iran and Uzbekistan enjoy brotherly and kinship relations."

The President described the relations between Iran and Uzbekistan as brotherly and developing, and said, "The Islamic Republic of Iran does not see any restrictions in the development of relations with Uzbekistan in various political, economic and cultural fields."

Referring to the two countries' common concern about the situation in the region, especially in Afghanistan, the President said, "The result of the presence of outsiders, especially the United States, in Afghanistan is nothing but misery, murder, bloodshed and holding Afghanistan back. We must help the Afghan people taste peace and security."

Referring to the presence of about four million Afghans in Iran and the continuation of Iran's humanitarian aid to these suffering people, Raeisi said, "I hope a common solution and vision will be found at the meeting of foreign ministers of Afghanistan's neighbouring countries."

The Foreign Minister of Uzbekistan Abdulaziz Kamilov, for his part, said, "The two countries have a high capacity and potential for the development of relations, and we are determined to take advantage of these capacities."

Stating that Uzbekistan welcomes the initiative of the Islamic Republic of Iran to look into the situation in Afghanistan, he said, "Given that the superpowers could not do anything for Afghanistan, the Tehran summit is of great political importance and we fully support its result."

Noting that the establishment of peace and stability in the region is in the interest of both countries and countries in the region, the Uzbek Foreign Minister said, "Uzbekistan seeks close cooperation with the Islamic Republic of Iran in various regional and international areas." 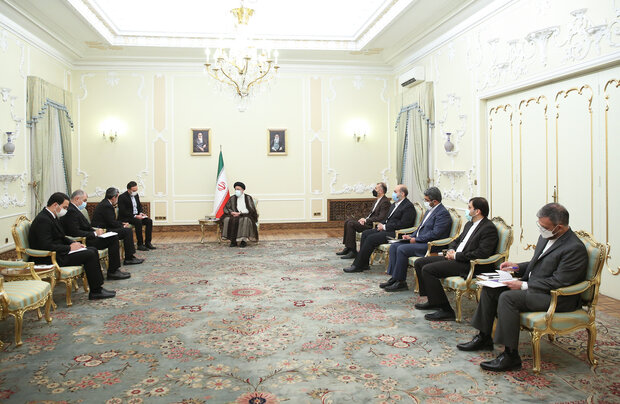 Speaking on Tuesday night in a meeting with the Foreign Minister of Turkmenistan Rashid Meredov, Raeisi thanked Turkmenistan for its cooperation and support for Iran's permanent membership in the Shanghai Cooperation Organisation, saying, "Relations between Iran and Turkmenistan are beyond political and economic relations, and stem from the heart and belief between the two nations and the level of these relations should increase day by day."

Pointing out that the capacity to expand Tehran-Ashgabat relations is far beyond the current level, the President said, "Increasing the level of relations by activating cooperation capacities in various fields, especially transit and energy, is in the interest of the two nations and the region."

On the issue of Afghanistan, Raeisi said, "We must work towards peace and security and the formation of an inclusive government in Afghanistan that represents all ethnic groups and political currents in the country."

Tajikistan favours establishing comprehensive relations and strengthening and deepening Tehran-Ashgabat ties, said Turkmen Foreign Minister, adding, "We consider Iran as our brother and friend country and seriously seek to increase the level of relations and cooperation in various fields including oil, gas, transportation and trade."

Referring to the importance of developing regional cooperation between the two countries, the Turkmen Foreign Minister said, "Turkmenistan supports the initiative of the Islamic Republic of Iran in Afghanistan and is ready to have close relations and cooperation with Tehran at all regional levels." 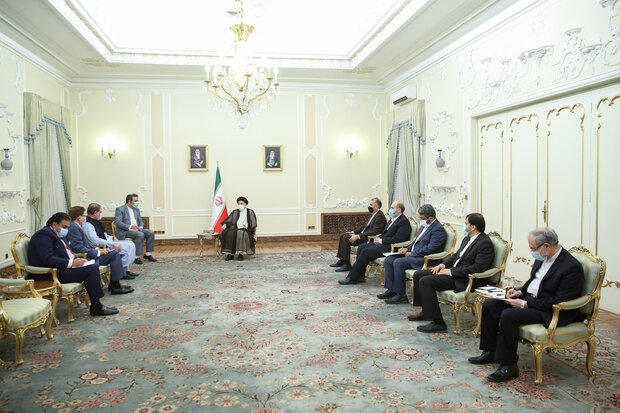 Speaking in a meeting with Pakistani Foreign Minister Shah Mahmood Qureshi on Tuesday, Ebrahim Raeisi said, "We have no restrictions on increasing economic and security relations with Pakistan, and the exchange of economic and political delegations between the two countries will help develop cooperation."

Expressing hope that a government would be formed in Afghanistan that represents all the people of the country, the President said, "Countries in the region can be effective in the security of Afghanistan."

Expressing concern that insecurity was created by ISIS after the expulsion of the Americans from Afghanistan, the President said, "We consider the problems in Afghanistan to be caused by the Americans because ISIS was formed by the United States."

Referring to the meeting of foreign ministers of Afghanistan's neighbouring countries hosted by Iran, the President said, "We hope this meeting can expel the Americans from the region and find a solution to solve Afghanistan's problems."

Pakistani Foreign Minister Shah Mahmood Qureshi also said during the meeting, "There is a feeling between the people of Iran and Pakistan as Afghanistan's neighbours to work for national peace and reconciliation in the country."

"Afghanistan needs urgent assistance, and that assistance must come from its neighbours and the international community," he said.