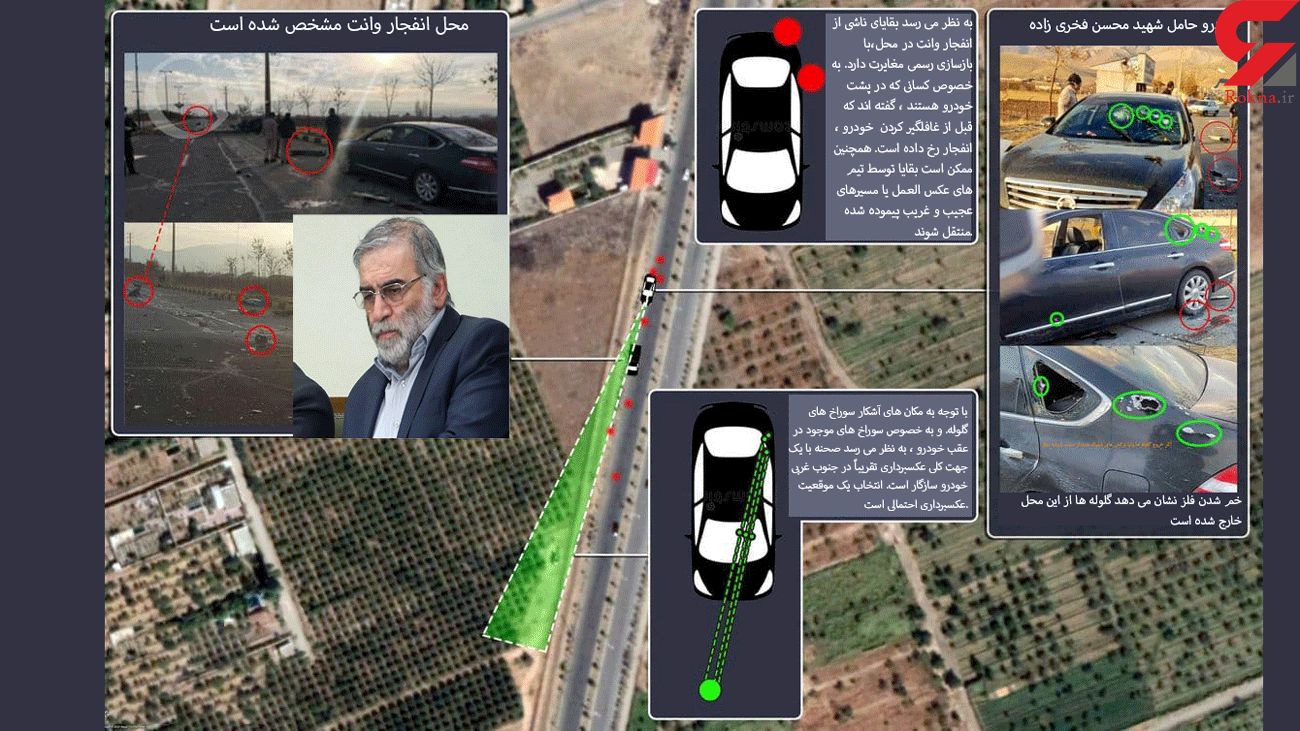 The remote-controlled weapon fired 13 high-accuracy rounds into Mohsen Fakhrizadeh, 62, known as the ‘father’ of Iran’s illegal atomic programme, as he was driven from the capital Tehran to his country residence last year.

The gun was so accurate that the scientist’s wife, who was sitting just inches from him, emerged entirely unscathed from the attack.

A bomb strapped to the remote-control device then exploded, destroying the weapon as the 20-strong team of spies who organised the hit melted away.

The execution on November 27 followed an eight-month surveillance operation by Mossad, the national intelligence agency of Israel.

Israeli spies first arrived in Iran in March 2020 where they made contact with locals and began preparations for the hit.

The team built up a minute-by-minute picture of Fakhrizadeh's routines in order to identify opportunities to have him killed.

A source close to the operation told the Jewish Chronicle: 'For eight months, they breathed with the guy, woke up with him, slept with him, travelled with him.

'They would have smelled his aftershave every morning, if he had used aftershave.'

The team soon identified a window of opportunity - during Fakhrizadeh's Friday journey from Tehran to his weekend retreat, a villa near the town of Absard.

But rather than attack the convoy with an armed team - risking a firefight that would potentially cause additional casualties - the spies suggested using a remote-control gun instead.

The weapon, they argued, was accurate enough to ensure that only Fakhrizadeh would be killed without harming any other member of his convoy.

The one-ton gun, including the explosives used to destroy it, was then smuggled into Iran in small pieces before being rebuilt and fitted to a Nissan pickup truck.

Once the gun had been built, gents parked the pickup along the road to Absard before establishing positions from where they could watch for Fakhrizadeh's approach and open fire.

After the convoy had passed a pre-selected point, the gun was activated and fired 13 bullets which struck Fakhrizadeh head-on, killing him instantly.

The bomb then exploded, destroying the gun before the team fled.

Contrary to Iranian claims that a bodyguard was hurt diving across Fakhrizadeh, sources said nobody else in the convoy was touched.

The weapon was also not operated by satellite, as Iran had initially said.

'They didn’t catch anyone. They didn’t even come close,' one of those familiar with the operation said.

'Their security was not bad at all, but the Mossad was much better.'

Jacob Nagel, one of Israel’s most senior defence officials, revealed that Mossad had decided to target Fakhrizadeh after uncovering a secret trove of documents that pointed to him as the head of the country's nuclear weapons programme.

He said: ‘Mossad had documents proving Fakhrizadeh had worked on several nuclear warheads, each one able to cause five Hiroshimas. He was serious.’

Israel declined to comment in November and on Wednesday night an Israeli government spokesman responded to the latest report by saying: ‘We never comment on such matters. There has been no change in our position.’

Fakhrizadeh, 59, was long suspected by the West of masterminding a secret nuclear bomb programme.

He had been described by Western and Israeli intelligence services for years as the mysterious leader of a covert atomic bomb programme halted in 2003, which Israel and the United States accuse Tehran of trying to restore. Iran has long denied seeking to weaponise nuclear energy.

According to the Jewish Chronicle’s report, Iran has ‘secretly assessed that it will take six years’ before a replacement for him is ‘fully operational’ and that his death had ‘extended the period of time it would take Iran to achieve a bomb from about three-and-a-half months to two years.’

Others believe that the time-span will actually be closer to five years, saying that Mossad itself was surprised by the impact Fakhrizadeh's death had.

Mossad sources also denied that America had been involved in tracking the scientist or launching the operation.

Agents said the US was given an indication that the hit was about to take place shortly beforehand, but was otherwise not involved.

'It was absolutely an Israeli operation, door to door. It was not political, it was a matter of security. It had nothing to do with Trump or the election,' the source said.