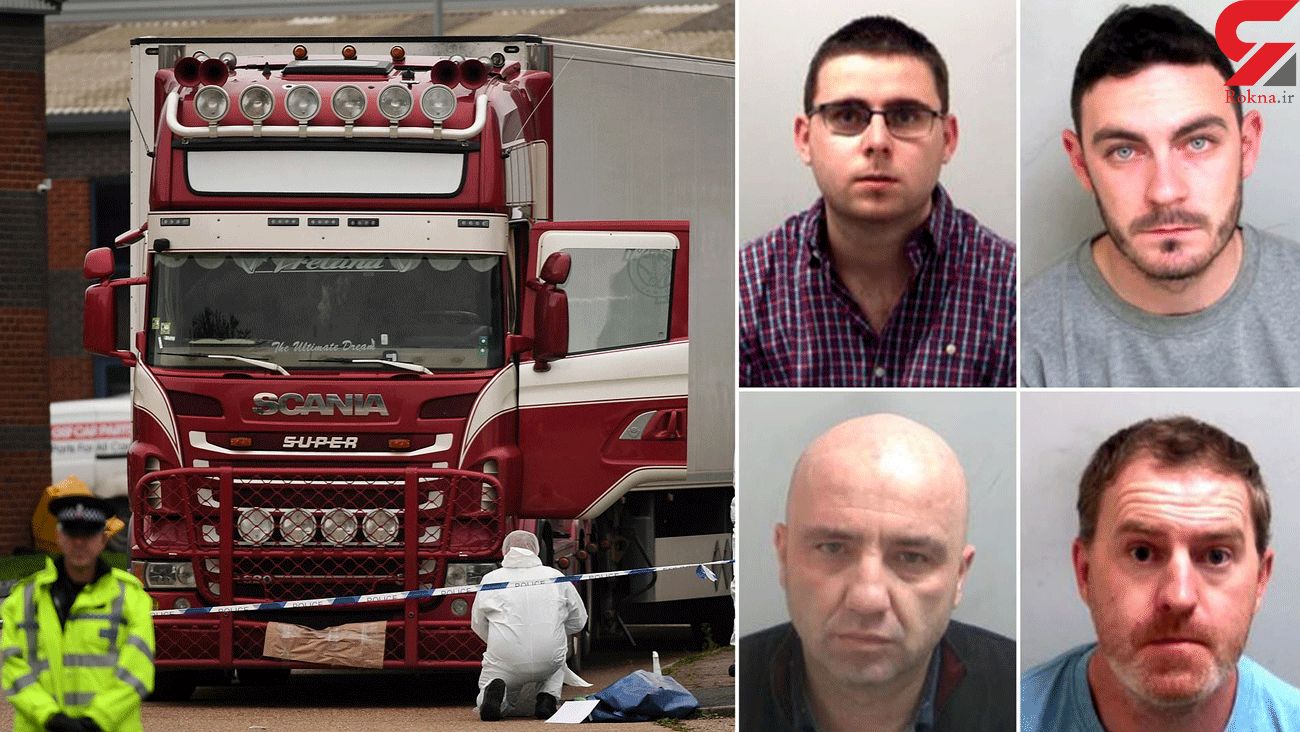 Four people-smugglers have been jailed for 78 years for the killings of 39 Vietnamese migrants who suffocated in an airtight lorry trailer that became a 40C "tomb".Ri

ngleaders Gheorghe Nica, 43, and Ronan Hughes, 41, and drivers Maurice Robinson, 26, and Eamonn Harrison, 24, were sentenced along with three other gang members on Friday.

Nica was given 27 years, Hughes was handed 20 years in prison, Harrison was sentenced to 18 years, and Robinson was jailed for 13 years and four months - all for 39 counts of manslaughter and a people-smuggling conspiracy.

Three others were jailed for a total of 14 years for lesser offences.

Mr Justice Sweeney told the defendants jailed for manslaughter they would serve two-thirds of the term in custody, instead of the usual half.

It comes 15 months after the bodies of 28 men, eight women and three children were found "closely packed" inside the sealed HGV container as steam poured from its doors in Grays, Essex.

During their harrowing final moments, some of the trapped migrants used a pole try to break out while others used their phones to send heartbreaking goodbye messages to their families as they ran out of air before reaching Britain.

A husband and wife, survived by two children aged six and four, were found dead holding hands and huddled together.

In his sentencing remarks at the Old Bailey in London, Mr Justice Sweeney said: “I have no doubt that, as asserted by the prosecution, the conspiracy was a sophisticated, long running and profitable one to smuggle mainly Vietnamese migrants across the channel.”

He said the migrants were transported in an airtight container with no means for escape and died an “excruciating death” as carbon dioxide levels soared and the temperature hit 40C while the container was at sea.

Mr Justice Sweeney said: “There were desperate attempts to contact the outside world by phone and to break through the roof of the container.

“All were to no avail and before the ship reached Purfleet (the victims) all died in what must have been an excruciatingly painful death.”

He added: “The willingness of the victims to try and enter the country illegally provides no excuse for what happened to them.”

The judge also said: “The evidence shows that in just a fortnight there were four episodes of transportation involving in total over 80 migrants.

“Had they all arrived safely their value to the overall conspiracy would have been in the order of £800,000."

Robinson, of Craigavon, found the bodies of the migrants, aged between 15 and 44, when he pulled over in an industrial estate and opened one of the trailer's doors just after 1am on October 23, 2019.

He had collected the container from a port in Essex and was instructed by Hughes via Snapchat to "give them air quickly don't let them out". Robinson responded with a thumbs-up emoji.

The Old Bailey heard that victim Nguyen Tho Tuan, 28, told his wife, children and mother as he ran out of air: “It's Tuan. I am sorry. I cannot take care of you.

One of the people in the container was recorded on a mobile phone saying "I cannot breathe".

Nguyen Dinh Luong, 20, was also recorded saying: "I'm sorry. It's all my fault." A voice in the background then adds: "He's dead."

Pham Thi Tra My, 26, sent her mum a series of harrowing text messages telling her "I am dying, I can't breathe", and that she loved her.

The migrants agreed to pay up to £13,000 each for a "VIP" smuggling service that they and their families back in Vietnam had hoped would lead to a better life in the UK.

The greedy international crime ring stood to make £1 million that month alone smuggling people into Britain via the Channel Tunnel or by boat to Essex.

The network, led by Nica and Hughes, had been operating for at least 18 months and wasn't stopped despite repeatedly coming to the attention of authorities.

About 12 hours before their bodies were discovered, the 39 victims were crammed into an airtight lorry container to be shipped from Zeebrugge, Belgium, to Purfleet, Essex, in pitch black and sweltering conditions.

Harrison collected the victims in Bierne, France, and his trailer was loaded on to the Clementine ship which left Zeebrugge at about 4pm on October 22, 2019, docking at Purfleet shortly after midnight.

But the trailer became a "tomb" with the temperature reaching an “unbearable” 38.5C (101F) and the carbon dioxide inside the container reaching its toxic threshold about three hours before the doors were opened, the Old Bailey heard.

Robinson and Hughes, of Armagh, had admitted plotting to people smuggle and 39 counts of manslaughter.

Nica, of Basildon, Essex, and originally from Romania, and Harrison, from County Down, were found guilty of the same offences following a trial.

Lorry driver Christopher Kennedy, 24, of County Armagh, Valentin Calota, 38, from Birmingham, and Alexandru-Ovidiu Hanga, 28, were also sentenced on Friday for their roles in the smuggling ring.

Kennedy and Calota, who were found guilty of conspiracy to assist unlawful immigration, were jailed for seven and four years, respectively.

The court had heard the operation was sophisticated, long-running and profitable, with the smugglers standing to make more than £1 million in October 2019 alone.

A total of seven smuggling trips were identified between May 2018 and October 23, 2019, although the court heard there were likely to have been more.

Migrants would board lorries at a remote location on the continent to be transported to Britain where they would be picked up by a fleet of smaller vehicles organised by Nica for transfer to a safe house until payment was received.

The fee was between £10,000 and £13,000, for the 'VIP route' in which the driver was aware of the presence of smuggled migrants inside the trailer attached to his lorry.

Some of the trips were thwarted by border officials and residents in Orsett, Essex, had repeatedly reported migrants being dropped off to the police.

In May 2018, Harrison, the "man on the Continent", was fined after being caught at the Channel Tunnel in France with 18 Vietnamese migrants in his trailer.

Yet the smuggling operation was not stopped until after the tragic journey.

When Robinson opened the doors at about 1.13am on October 23, 2019, after pulling over, a plume of vapour escaped and Robinson stood for 90 seconds after seeing bodies inside. He then closed the door, got back into the cab and drove off.

Before dialling 999, the Old Bailey heard, he exchanged panicked calls with his boss Hughes and Nica, who had been waiting for him in Orsett with his drivers.

Robinson drove in a loop before returning to the avenue where he had opened the door moments earlier.

Nica told jurors that Robinson had called him and said: "I have a problem here - dead bodies in the trailer."

About 23 minutes after finding the bodies, Robinson finally dialled 999, at 1.36am.

Asked if the patients were breathing, he said: “No. There, there’s loads of them, there’s immigrants in the back but they’re, they’re all lying on the ground.

“I went and lifted a trailer from Purfleet, the freight terminal, and I got around to where I was gonna park up for the night and I heard a noise in the back and I opened the door and there’s a bunch of them lying.”

When an operator asked how many people were in the trailer, Robinson said: “The trailer is jammed. I don’t know.”

Essex Police PC Jack Emerson, one of the first officers on scene, told the court the migrants were “closely-packed” and “half-naked” as they lay motionless on the floor of the trailer.

He told the court: "Most of them were wearing clothes on their lower half but they all appeared to not be wearing any clothing on their upper half.

"All of the bodies appeared intact and it was in my opinion that they had not been there for a very long period of time as there was not any visible sign of decomposure.

"There was however a strange smell coming from the trailer that smelt like chemicals.

"There was also smoke condensation coming from the rear of the trailer which suggested to me that the trailer was refrigerated."

Jurors were told the temperature inside the trailer reached a maximum of 38.5C sometime after 9pm.

The court heard that between 10pm and 10.30pm the carbon dioxide (CO2) inside the trailer had reached its toxic threshold, though the prosecutor said that was not agreed evidence.

The families of the victims in Vietnam and Britain have spoken of their loss and hardship.

Phan Thi Thanh, 41, had sold the family home and left her son with his godmother before setting off on the ill-fated journey.

Her "heartbroken" son said: "I heard about the incident from mass media so I called dad in the UK in order to confirm if mum was a victim.

"I was very shocked, very sad and I was crying a lot."

Tran Hai Loc and his wife Nguyen Thi Van, both 35, who were found huddled together in death, left two children aged six and four.

The children's grandfather Tran Dinh Thanh said: "Everyday, when they come home from school they always look at the photos of their parents on the altar.

"The decease of both parents is a big loss to them."

He said: "We were very shocked, trembled, we lost track and awareness of our surroundings.

"My wife had fainted many times whenever our son's name was mentioned."

The maximum sentence for people-smuggling is 14 years in prison, with manslaughter carrying a possible life sentence.

Essex Police Chief Constable Ben-Julian Harrington said: "Every person in that trailer had left behind a family. They had been promised safe passage to our shores and they were lied to. They were left to die, all because of the greed of the men who have been sentenced today."

He paid tribute to the victims' families, saying: "They've kept their dignity, and they put their trust in us to deliver justice. I promised them that we would, and my teams have done just that."

Senior investigating officer Detective Chief Inspector Daniel Stoten welcomed the sentences, saying: "I hope that the quality and the detail of the evidence, and the high level of exposure that this case has had, demonstrates that our pursuit of those involved in these wicked crimes is unrelenting.

"May this serve as a warning to those who think it's OK to prey on the vulnerabilities of migrants and their families, transporting them in a way worse than we would transport animals. My message to you is that we will find you and we will stop you.

"Thirty-nine victims died in the trailer. Two of them were just 15 years old and had travelled half the world unaccompanied - all of them left behind families, memories, and homes, in the pursuit of a false promise of something better. Instead they died, in an unimaginable way, because of the utter greed of these criminals."