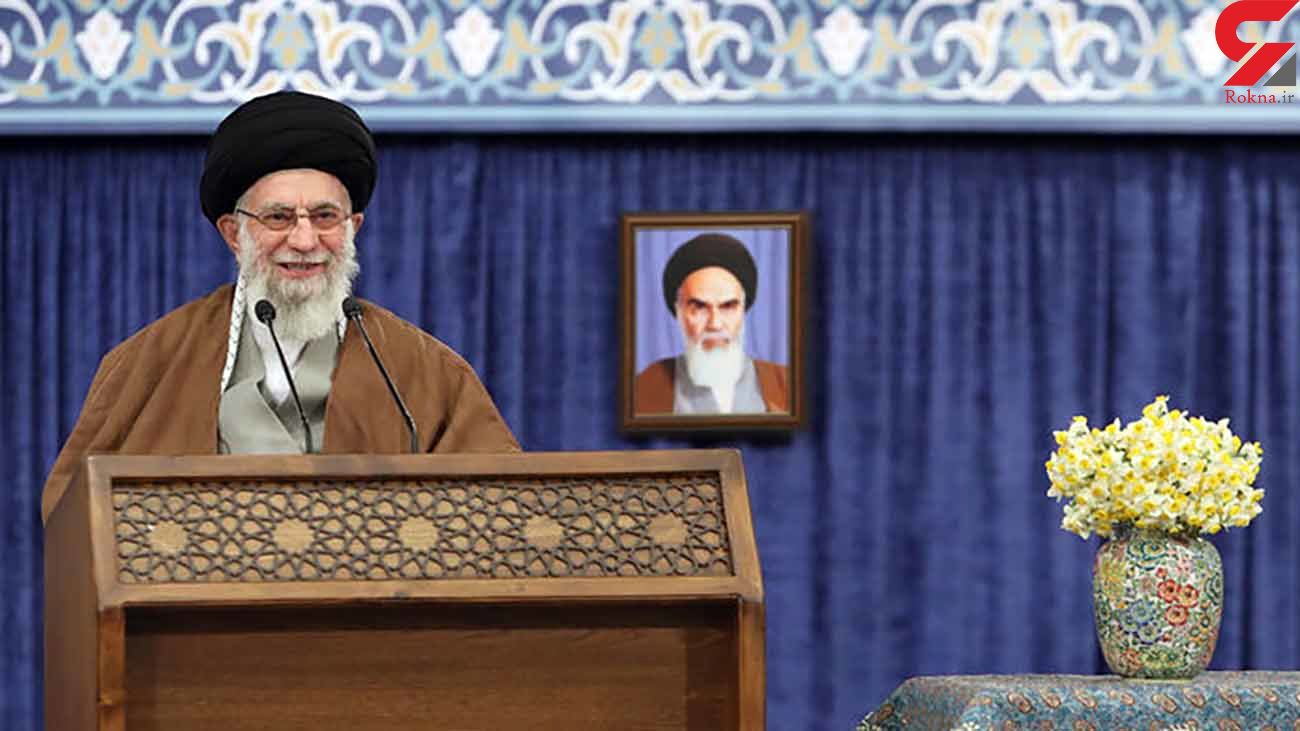 In a televised message to the nation on the occasion of the Iranian New Year on Saturday afternoon, the Leader lauded the Iranian people’s proven capabilities both in the face of the coronavirus pandemic and sanctions imposed on the country.

Ayatollah Khamenei said the enemies openly acknowledge that their “maximum pressure” campaign against Iran has failed.

Ayatollah Khamenei designated the new Iranian calendar year of 1400 as the year of “Production: Support and the Elimination of Obstacles.”

The following is the full text of the message:

In the Name of Allah, the Beneficent, the Merciful

All praise is due to Allah, the Lord of the Worlds, and peace and greetings be upon our Master Muhammad, and upon his pure household

O’ Conqueror of hearts and sights

O’ Planner of night and day

O’ Transformer of power and conditions

Transform our condition to the best of conditions!

I wish to congratulate all our dear compatriots, in particular the esteemed families of martyrs and of disabled war veterans, the disabled war veterans themselves, and all veterans on the arrival of Norouz and the New Year. I also wish to congratulate all the nations who celebrate Norouz and the arrival of this Eid. This year, our Eid coincides with the auspicious occasions of the month of Shaban. I hope that this coincidence will have many worldly and otherworldly blessings for our new year.

The year 1400 is blessed with two 15th of Shaban celebrations as our people will be celebrating the birthday anniversary of the Imam of the Age (may our souls be sacrificed for his sake) twice in this year.

The year 1399 ended with various incidents, some of which were unprecedented. One of those incidents, which was really unprecedented and unfamiliar to our nation, was the phenomenon of the coronavirus which affected the lives of all people. It had an impact on different businesses, the educational environment and religious gatherings as well as on trips, sports events and various other matters in the country. It delivered a hard blow to employment in our country.

Of course, the most bitter event was the demise of tens of thousands of our dear people and this means that tens of thousands of families had to mourn the loss of their dear ones. I wish to benefit from this opportunity to express my condolences and my sympathy to all those dear families. I hope that God will give them patience and bestow His mercy and forgiveness on the deceased.

In one sense, the year 1399 was the year in which the Iranian nation demonstrated it capabilities including in confronting the big test – that is to say, the coronavirus. To be fair, our dear people – ranging from the medical personnel of the country, researchers and scientists to the masses of the people and jihadi groups, displayed great capabilities in handling that bitter incident despite the enemy’s “maximum pressures”. Despite the enemy’s sanctions and although the path of foreign resources was blocked, our nation, our scientists, our physicians, our nurses, our medics, our laboratory experts and our radiologists – the people in charge of the people’s health – really managed to engender a great experience and to display a great feat.

Surge of production realized to an acceptable degree

Well, the slogan of the year 1399 was “A surge in production”. If I were to make a general assessment on the basis of many popular and governmental reports – we receive reports from various organizations and places – I would say that this slogan was realized to an acceptable degree. In other words, the surge in production materialized in some areas and affairs of the country. Of course, it did not materialize to the desired degree. In other words, even in those areas where it materialized – mostly in infrastructural and construction areas – the results were not tangible in the general economy of the country and in the people’s economic situation. In other words, the movement was not felt. That was while we had expected that the surge in production would in some ways solve some of the people’s problems.

Of course, the slogan of bringing about a surge in production is a completely revolutionary and important slogan. If the slogan is truly achieved in the country, and hopefully it will, it will exert a deep economic impact on the country - on the value of national currency and other fundamental economic matters – and it will also lead to national self-confidence, public satisfaction and national security. If the surge in production is attained – I hope that it will happen, God willing – it will have these important results and advantages.

Well, why did it not completely materialize in the year 1399? Because on the one hand, there were certain obstacles and on the other hand, production was not supported in all areas. Production needs certain instances of essential legal and governmental support as well as the elimination of the obstacles on the path of production. For example, when a dysfunctional production center which works with 30, 40 percent of its capacity or which is completely non-functional, begins to work again and to engage in production thanks to the determination of a number of youth and the encouragement of others, if the

same products are imported into the country, either by criminal smuggling hands or through legal ways and due to legal shortcomings, then production will naturally not be boosted like this. This is a barrier in the way of production. This means that what has already been achieved will fail later on.

Another obstacle is lack of incentives, such as the lack of investment incentives. Investment in production requires certain incentives. In other words, those who can invest should be encouraged to do so. The business environment in the country should have the power to encourage them to invest, and the cost of production should not increase for them. However, these things have not been done. This means that the necessary measures have not been adopted. There have not been noteworthy incentives, nor has a solution been found for production costs. In one year – it was not the year 1399, it was perhaps before the year 1398 – the producers’ expenses exceeded those of consumers. Well, these are things that prevent the progress of production.

So we started this revolutionary movement in the year 1399. The Iranian nation has welcomed the surge in production to a certain extent. This should continue. The year 1400, which is beginning now, is in fact the entrance into a new century. A new century is actually beginning. Therefore, we should adopt a long-term outlook towards the issues of the country. We should evaluate them with a long-term approach.

The year 1400 is an important and sensitive year because of the elections that will be held in the beginning of the year. In the month of Khordad, we have important elections which can exert an important influence in the conditions, affairs and future of the country because there will be new managers which most probably will be energetic and which will have strong motivation. They will undertake the executive management of the country. Therefore, the upcoming elections will make this year very important and sensitive. In my New Year speech, I will raise more points about the elections. Today, this much is enough.

Greetings be upon you and Allah’s mercy and blessings.