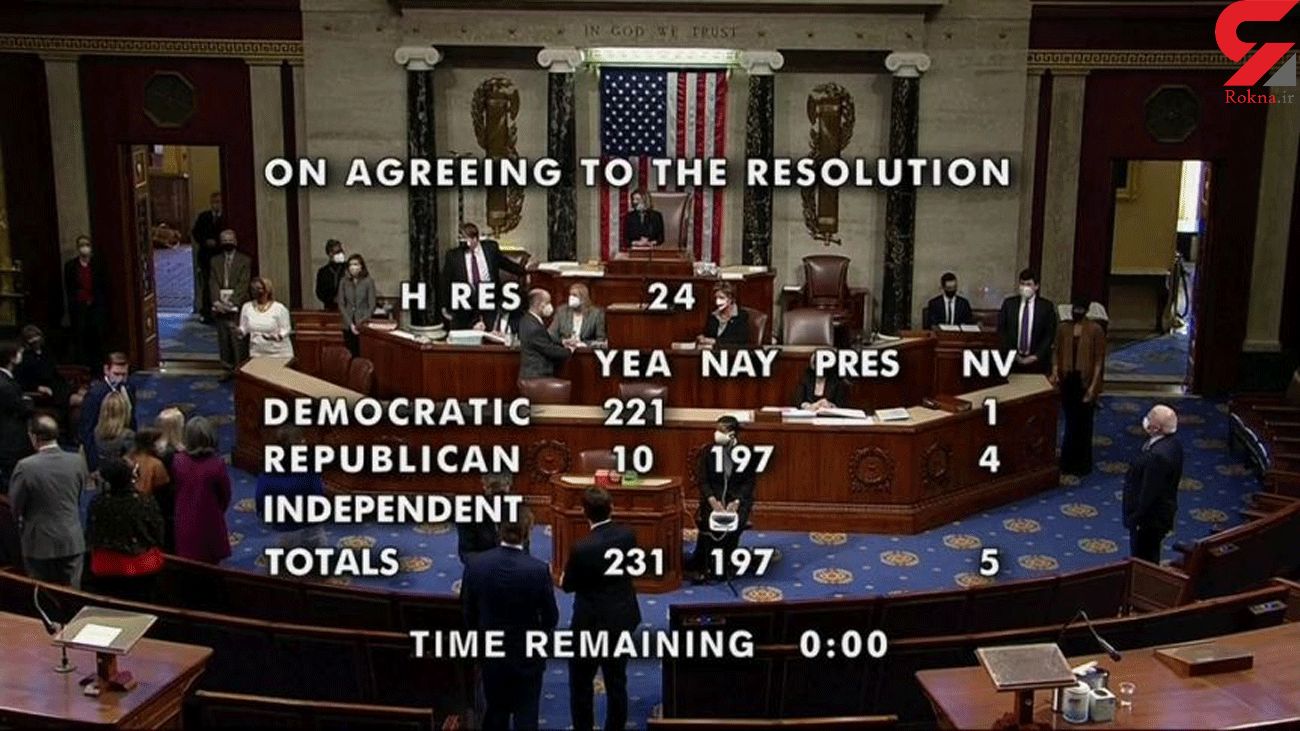 Trump has cemented his place in history as the only president to be impeached twice in a bipartisan rebuke that was approved with unprecedented speed, CBSnews reported

The final vote was 232 to 197, with 10 Republicans joining all 222 Democrats in supporting a single article of impeachment charging the president with "incitement of insurrection."

"We know that the president of the United State incited this insurrection, this armed rebellion, against our common country," House Speaker Nancy Pelosi said ahead of the vote. "He must go. He is a clear and present danger to the nation that we all love."

Trump was first impeached in December 2019 for his efforts to pressure Ukraine to investigate the Biden family. His second impeachment comes just one week before President-elect Joe Biden will be sworn into office as his successor. Only two other presidents have been impeached since the founding of the republic.

On January 6, the president addressed supporters near the White House, urging them to "fight like hell" as members of Congress prepared to formalize Biden's win. An angry mob subsequently marched on the Capitol and stormed the complex, shattering windows and breaking down doors to gain access to the halls of Congress. The mob managed to halt the counting of the electoral votes for several hours.

House Democrats brought the impeachment resolution to a vote with an unprecedented speed that reflected the severity of the assault on the Capitol and the limited time remaining in Mr. Trump's term. The resolution was first introduced on Monday, with Democrats forgoing the typical process of holding hearings and conducting an investigation.

The article of impeachment will soon head to the Senate, where lawmakers must hold a trial on whether to convict Trump and remove him from office. Senate Majority Leader Mitch McConnell said Wednesday he has not made a decision on whether he will vote to convict the president at trial.

With just seven days left in Trump's term, the Senate trial could potentially stretch into the term of his successor. If that happens, the Senate could still choose to convict Trump and bar him from holding any federal office in the future. A vote to convict requires a vote of two-thirds of the Senate.

The president has refused to take responsibility for his role in inciting the mob that stormed the Capitol, insisting on Tuesday that his speech before the riot was "totally appropriate."Follow the Official Rokna NEWS Telegram Channel For More and fresh NEWS.