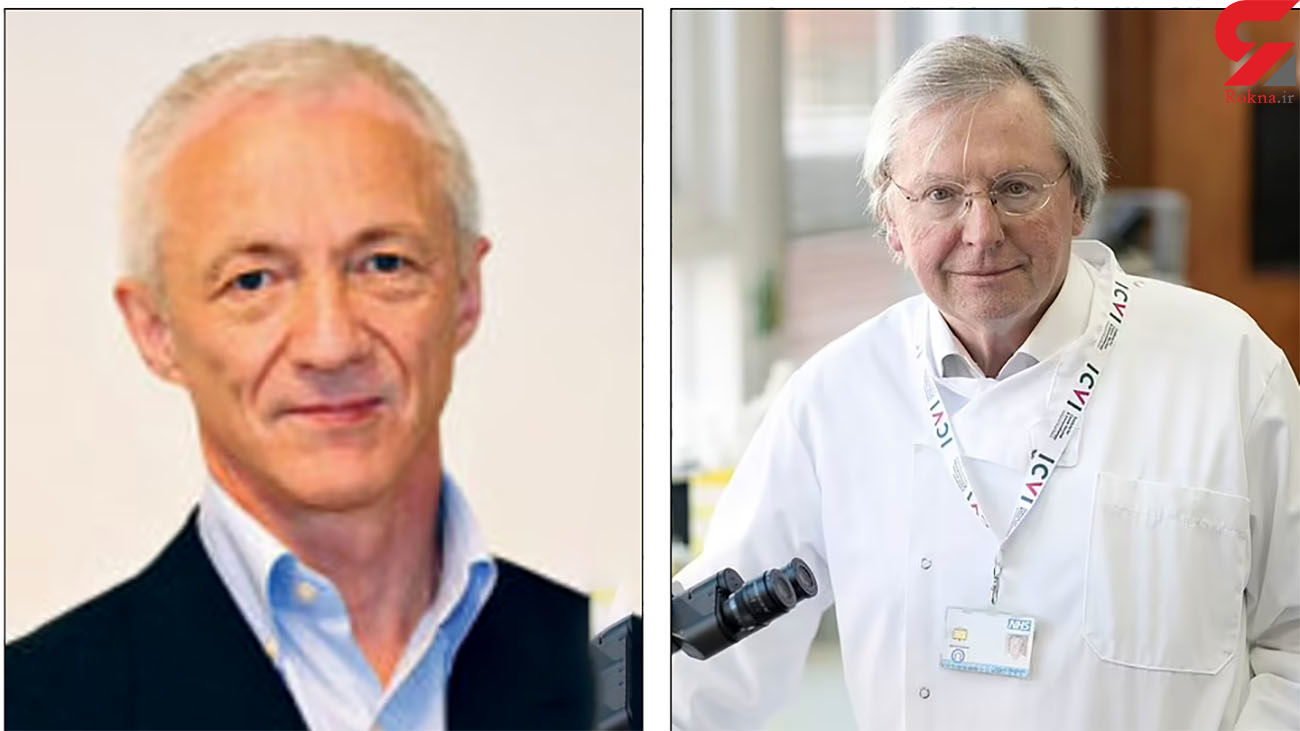 The paper's authors, British Professor Angus Dalgleish and Norwegian scientist Dr. Birger Sørensen, wrote that they have had 'prima facie evidence of retro-engineering in China' for a year - but were ignored by academics and major journals.

Dalgleish is a professor of oncology at St George's University, London, and is best known for his breakthrough creating the first working 'HIV vaccine', to treat diagnosed patients and allow them to go off medication for months.

Sørensen, a virologist, is chair of pharmaceutical company, Immunor, which developed a coronavirus vaccine candidate called Biovacc-19. Dalgleish also has share options in the firm.

The shocking allegations in the study include accusations of 'deliberate destruction, concealment or contamination of data' at Chinese labs, and it notes the silencing and disappearance of scientists in the communist country who spoke out.

The journal article, exclusively obtained by DailyMail.com and slated for publication in the coming days, is set to make waves among the scientific community, as the majority of experts have until recently staunchly denied the origins of COVID-19 were anything other than a natural infection leaping from animals to humans.

While analyzing COVID-19 samples last year in an attempt to create a vaccine, Dalgleish and Sørensen discovered 'unique fingerprints' in the virus that they say could only have arisen from manipulation in a laboratory.

They said they tried to publish their findings but were rejected by major scientific journals which were at the time resolute that the virus jumped naturally from bats or other animals to humans.

Even when former MI6 chief Sir Richard Dearlove spoke out publicly saying the scientists' theory should be investigated, the idea was dismissed as 'fake news.'

Over a year later, leading academics, politicians and the media finally flipped, and have begun to contemplate the possibility that COVID-19 escaped from the Wuhan Institute of Virology in China - a lab where experiments included manipulating viruses to increase their infectiousness in order to study their potential effects on humans.

This week, President Joe Biden ordered the intelligence community to re-examine how the virus originated, including the lab accident theory.

The announcement followed the revelation that a previously undisclosed intelligence report had been made to the White House, claiming that several researchers at the Wuhan institute were hospitalized with illness in November 2019. The document was uncovered this week by the Wall Street Journal.

US health officials have also come under fire for allegedly funding researchers' controversial and risky experiments at the Wuhan lab.

Now, Dalgleish and Sørensen have authored a new study, which concludes that 'SARS-Coronavirus-2 has no credible natural ancestor' and that it is 'beyond reasonable doubt' that the virus was created through 'laboratory manipulation'.

In the 22-page paper which is set to be published in the scientific journal Quarterly Review of Biophysics Discovery, the scientists describe their months-long 'forensic analysis', looking back at experiments done at the Wuhan lab between 2002 and 2019.

Digging through archives of journals and databases, Dalgleish and Sørensen pieced together how Chinese scientists, some working in concert with American universities, allegedly built the tools to create the coronavirus.

Much of the work was centered around controversial 'Gain of Function' research – temporarily outlawed in the US under the Obama administration.

Gain of Function involves tweaking naturally occurring viruses to make them more infectious, so that they can replicate in human cells in a lab, allowing the virus's potential effect on humans to be studied and better understood.

Dalgleish and Sørensen claim that scientists working on Gain of Function projects took a natural coronavirus 'backbone' found in Chinese cave bats and spliced onto it a new 'spike', turning it into the deadly and highly transmissible SARS-Cov-2.

One tell-tale sign of alleged manipulation the two men highlighted was a row of four amino acids they found on the SARS-Cov-2 spike.

In an exclusive interview with DailyMail.com, Sørensen said the amino acids all have a positive charge, which cause the virus to tightly cling to the negatively charged parts of human cells like a magnet, and so become more infectious.

But because, like magnets, the positively charged amino acids repel each other, it is rare to find even three in a row in naturally occurring organisms, while four in a row is 'extremely unlikely,' the scientist said.

'The laws of physics mean that you cannot have four positively charged amino acids in a row. The only way you can get this is if you artificially manufacture it,' Dalgleish told DailyMail.com.

Their new paper says these features of SARS-Cov-2 are 'unique fingerprints' which are 'indicative of purposive manipulation', and that 'the likelihood of it being the result of natural processes is very small.'

'A natural virus pandemic would be expected to mutate gradually and become more infectious but less pathogenic which is what many expected with the COVID-19 pandemic but which does not appear to have happened,' the scientists wrote.

'The implication of our historical reconstruction, we posit now beyond reasonable doubt, of the purposively manipulated chimeric virus SARS-CoV-2 makes it imperative to reconsider what types of Gain of Function experiments it is morally acceptable to undertake.

'Because of wide social impact, these decisions cannot be left to research scientists alone.'

During a Senate hearing on Wednesday, White House chief medical advisor Dr. Anthony Fauci admitted he was not certain US funding for researchers at the Wuhan lab was not spent on controversial and risky Gain of Function experiments.

'How do you know they didn't lie to you and use the money for gain of function research anyway?' Louisiana Senator John Kennedy asked Fauci.

'You never know,' he replied, but added that scientists at the lab are 'trustworthy'.

National Institutes of Health director Dr. Francis Collins told the hearing that US-funded scientists at the lab 'were not approved by NIH for doing gain of function research.'

In another striking claim contained in the research paper, Dalgleish and Sørensen say they have evidence that after the pandemic began, Chinese scientists took samples of the COVID-19 virus and 'retro-engineered' it, making it appear as if it had evolved naturally.

They said they were suspicious of a raft of new strains suddenly entered into gene databases by predominantly Chinese scientists early in 2020, years after they were recorded as being collected.

'We think that there have been retro-engineered viruses created,' Dalgleish told DailyMail.com. 'They've changed the virus, then tried to make out it was in a sequence years ago.'

In their paper, Dalgleish and Sørensen also pointed to 'deliberate destruction, concealment or contamination of data' in Chinese labs and noted that 'Chinese scientists who wished to share their knowledge have not been able to do so or have disappeared.'

'It appears that preserved virus material and related information have been destroyed. Therefore we are confronted with large gaps in data which may never be filled,' they wrote.

'Strains 'popped up' after January 2020 are not credible… For a year we have possessed prima facie evidence of retro-engineering in China in early 2020.'

In January last year DailyMail.com revealed that scientists had been warning about the risk of deadly pathogens escaping from the Wuhan lab since it was opened in 2017.

China installed the first of a planned five to seven biolabs designed for maximum safety in Wuhan in 2017, for the purpose of studying the most high-risk pathogens, including the Ebola and the SARS viruses.

Tim Trevan, a Maryland biosafety consultant, told the science journal Nature that year, when the lab was on the cusp of opening, that he worried that China's culture could make the institute unsafe because 'structures where everyone feels free to speak up and openness of information are important.'

In fact, the SARS virus had 'escaped' multiple times from a lab in Beijing, according to the Nature article.

US State Department officials visited the Wuhan institute in 2018 and sent two official warnings back to DC alerting the government to poor safety there, according to the Washington Post.

Wuhan National Biosafety Laboratory, housed at the Wuhan Institute of Virology, was China's first lab to be rated biosafety level 4, the most secure classification.

But Sørensen said that he believes the virus escaped from lower security areas of the institute, where he believes Gain of Function research was performed.

'We have seen lab leaks and we know it's happening. We also know from the reports we've seen, that coronavirus is worked on in Biosafety Level 2 or 3 labs. If they do Gain of Function in such labs, what do you expect?' he said.

In February 2020 a molecular biomechanics researcher at South China University of Technology, Botao Xiao, published a paper claiming 'the killer coronavirus probably originated from a laboratory in Wuhan,' highlighting safety issues at the institute.

Xiao withdrew the paper weeks later after Chinese authorities denied any accidents at the lab.

The same month, a group of 27 scientists wrote a statement in top journal The Lancet, saying they 'strongly condemn conspiracy theories suggesting that covid-19 does not have a natural origin' and 'overwhelmingly conclude that this coronavirus originated in wildlife.'

Three of the authors later told the Wall Street Journal that they now believe a lab accident is worth consideration as an explanation for the origins of covid-19.

Dalgleish told DailyMail.com that he believed resistance to the theory that COVID-19 is a man-made, escaped virus comes from scientists fearful that the revelation would shut down their field.

'This looks like a weak defense to protect the discipline so that this type of genetic engineering will not be interfered with,' he said. 'I make no bones about it. The Gain of Function engineering should have been banned ages ago.'

Questioned at a congressional hearing this week, White House chief medical adviser Dr. Anthony Fauci denied that any US funding went towards Gain of Function research in the Wuhan Institute of Virology.

Fauci told lawmakers that the National Institutes of Health committed $600,000 to the Chinese lab through the non-profit EcoHealth Alliance, to study whether bat coronaviruses could be transmitted to humans.

NIH Director Dr. Francis Collins also told the hearing that US-funded scientists at the lab 'were not approved by NIH for doing gain of function research'.

'We are, of course, not aware of other sources of funds or other activities they might have undertaken outside of what our approved grant allowed,' he added.

The NIH ceased its funding to the EcoHealth Alliance in April 2020.