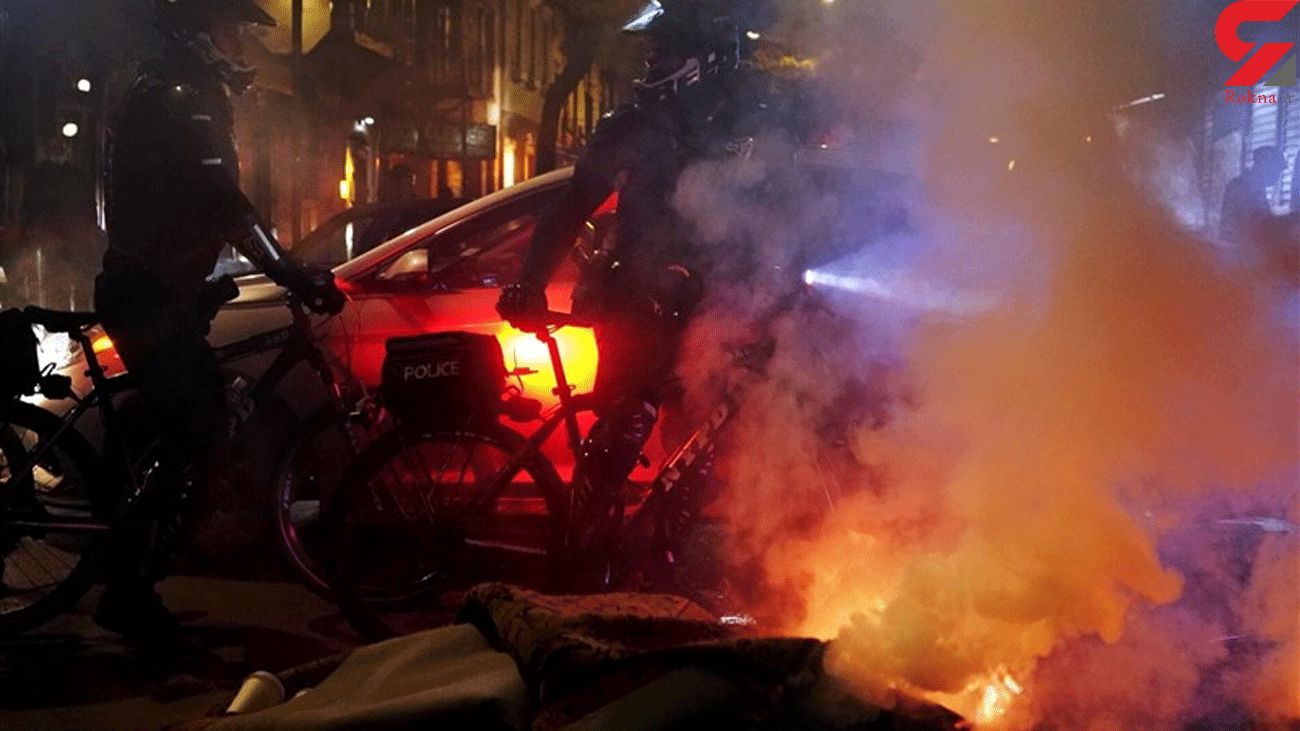 The protests and subsequent confrontations came as the city and much of the rest of the United States remained on edge amid the presidential election’s uncertain outcome and with the Police Department prepared to quell any potential unrest.

At around 8:30 p.m. in the West Village, a phalanx of officers moved on a group of several hundred people who had gathered earlier outside the New York Public Library in Midtown before marching to Washington Square Park.

The protesters had briefly shut down traffic in the neighborhood while chanting slogans like “every city, every town, burn the precincts to the ground” as they passed boutique restaurants where patrons were enjoying dinner on an unseasonably warm evening.

Employing the law enforcement tactic known as kettling, the officers pushed protesters out of the street and sought to contain them on sidewalks. At one point, as a few dozen demonstrators walked down an empty side street near the park, police officers on bicycles raced past them and blocked them at the next cross street.

As the protesters banged against signposts and shouted at the police to move, more officers in riot gear joined the fray. Yet another group of police officers, their bright blue and black helmets bobbing beneath the lights from apartments above, approached from behind.

With the protesters surrounded, dozens of officers in riot gear moved in, encircling the group and pushing protesters to the ground as they made arrests.

“Why are you in riot gear, we don’t see no riot here,” protesters who had not been hemmed in screamed.

Smoke, flashing red and blue police lights and the sound of yelling filled the streets as officers, some of them grabbing their targets in rough fashion, tried to break up the crowd. A recorded message that the gathering was unlawfully blocking traffic blared from a speaker.

At least 58 people were arrested in connection with the protests, said a senior law enforcement official who spoke on the condition of anonymity because he was not authorized to discuss the cases publicly.

“We appreciate and value the importance of freedom of speech,” the Police Department said in a statement posted on Twitter, adding that those who were arrested had “attempted to hijack a peaceful protest.”

The scene in the West Village contrasted sharply with the near-giddy mood that had carried the protesters along earlier as they called to “defund the police,” have every vote counted and end racial injustice.

As the confrontation unfolded, Chloe Hartstein recorded the arrest of a friend while standing across from a row of officers clad in riot gear.

Ms. Hartstein said that her friend, whom she identified as a member of the activist group Street Riders NYC, had been walking on Sixth Avenue with dozens of other people when officers surrounded the group near Ninth Street and put him in the back of a police van.

“They didn’t give a reason for his arrest,” she said. “They just took him.”

A second confrontation occurred around 9:30 p.m. near Union Square Park and involved a separate group that had marched through the Manhattan streets, flanked at all times by officers on bicycles, after gathering outside the Plaza Hotel.

The crowd was milling around near the intersection of 14th Street and Third Avenue when officers rushed in. One demonstrator, Bahlya Yansane, 29, said it appeared that an officer had fallen off or dropped his bike after jousting repeatedly with a protester who had been trying to force the officer onto the sidewalk.

Throngs of officers raced into and separated the crowd, arresting several people and wrestling some to the ground, he said.

“I’m shook up right now,” said Mr. Yansane, who noted that he had been attending street protests in the city since May.

Beyond the trash fires, there was no evidence of the property damage that some business owners were clearly anticipating when they boarded up their storefronts against the kind of looting and rioting that broke out briefly in June in New York amid protests after the police killing of George Floyd.

This week, police officials, on guard for violent unrest, had used trucks and barricades to create a “frozen zone” around President Trump’s showpiece property in Midtown, Trump Tower, while dispatching officers to each of the more than 1,200 polling stations in the city on Tuesday.

Terence A. Monahan, the chief of department and the police force’s top uniformed official, said at a news conference this week that officers were “fully prepared” to keep the city safe in the event of unrest.

“My message to anyone who wants to cause violence and destruction is don’t even try it,” he said.

Police officials sounded confident that officers would handle any unrest differently than they did over the summer, when they appeared to be caught off guard by what turned into huge protests. Thousands of officers were pulled onto patrol, many for the first time in years, with little or no training in how to handle large crowds.

Police officials said they had conducted an internal review of the department’s handling of the protests and had introduced changes that included training rank-and-file officers as well as senior leaders in disorder control.

“We hold the line, we don’t react on our own,” said Juanita Holmes, who was appointed last week as chief of patrol, a job in which she oversees the department’s largest and most visible arm. “We don’t just arbitrarily arrest people, even if they throw a bottle.”