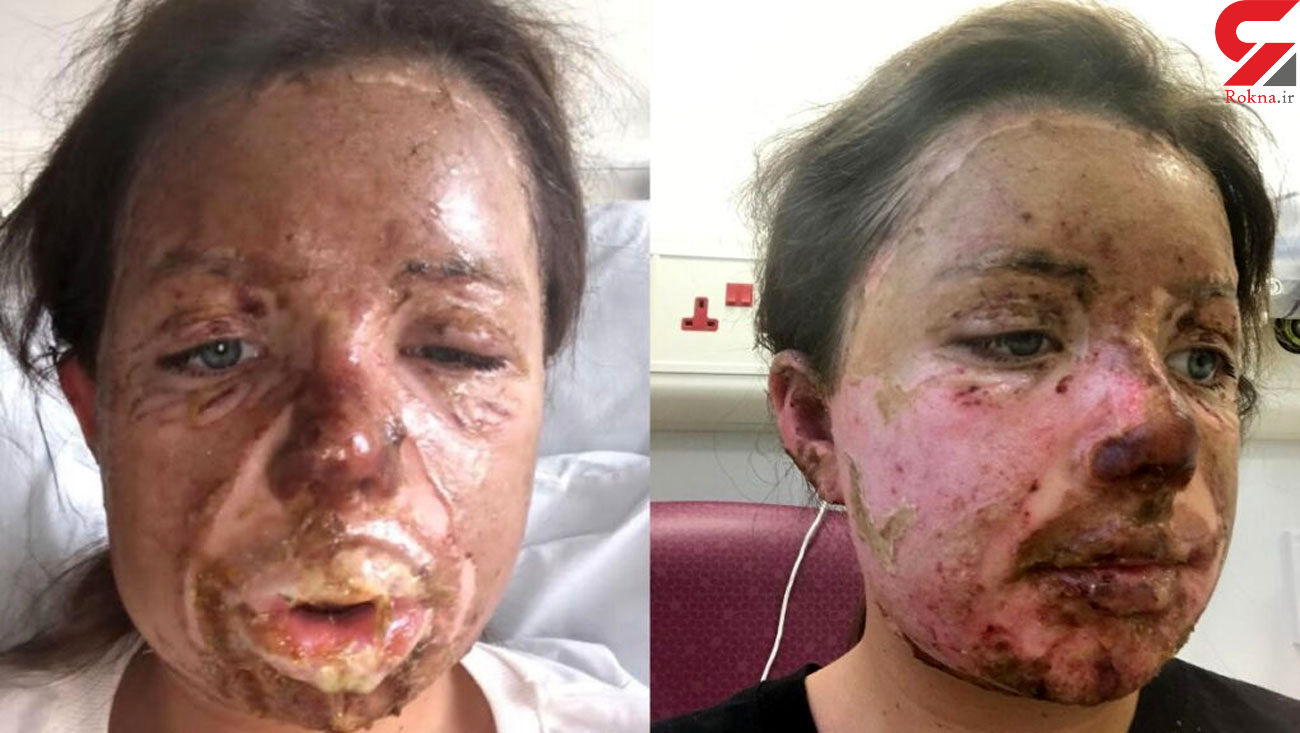 A brave teenager was left with agonising facial burns after a freak lighter fluid explosion at home.

Grace Owen, 18, was set ablaze after her dad attempted to relight a table top burner using a bottle of ethanol - which ignited in his hands.

She has shared graphic images of her injuries to warn others about what happened, saying she 'looked like she'd been electrocuted'.

The images show Grace's badly burnt and blistered face covered in painful welts. Her left eye is swollen shut, while her fringe and eyebrow have been singed off.

One picture shows painful lesions and swelling to her lips, while others show burns to her hands and underarms.

The student, from Eskbank, Midlothian, fell victim to a scenario known as "flamejetting", which occurs when a fuel bottle has just the right amount of liquid and oxygen in it to result in combustion when exposed to a flame.

Unbeknownst to him, the flame was still partially alive and the minute the liquid fuel was poured, the "perfect storm" inside the bottle transformed it into a "grenade" which exploded in his daughter's face.

Grace's hair and jumper immediately caught fire and she was forced to roll on the floor in a desperate attempt to extinguish herself, but not before she sustained serious burns.

The brave teen has since taken to social media to share photos of her injuries, in the hopes of warning others about the potential hazard.

Grace described her terror when she realised what was happening: "I remember being on the floor and just thinking, this is it, my life is going to change from here.

"I could hear my hair sizzling, I opened my eyes and I could just see a glow of light from behind me.

"I got in the shower, I stayed in for less than ten minutes though because otherwise your body can go into shock.

"I looked in the bathroom mirror and I could see the different parts of my skin were starting to blister.

"I had no eyebrows, no fringe or eyelashes. I looked like I had been electrocuted.

Luckily, mum Marie Owen, 45, acted quickly and managed to bundle Grace into a cold shower, which turned out to be crucial to preventing further damage.

Business owner Marie explained: "She was sat about two metres away from it in front of me and her 15-year-old brother.

"Her dad lit it and it just became this flame thrower type effect.

"I saw it happen and there was a moment of shock before Grace started screaming. She dropped to the floor and our instinct was to just get on top of her.

"I patted her out and my husband phoned an ambulance."

Grace was then rushed to the Royal Infirmary before being transferred to St John's Hospital for specialist burns treatment, where she remained for 10 days.

Grace added: "They had to get all the dead skin off which was quite painful, then they bandaged my arms.

"They kept checking me because if the fire had gone into my mouth it could cause my throat to swell up.

"My face was leaking protein, it was so uncomfortable. All my nose hairs fell out too, so all I could smell was burning which just kept reminding me of what happened.

"They couldn't tell me if my face was going to be okay and they were talking about skin grafts, which was a shock, because just 15 minutes earlier I was sitting at the table with my family."

Luckily, Grace is expected to make a strong recovery. However the family is now calling for more regulations surrounding the sale of use of these kinds of candles.

Marie explained: "She was so lucky but so unlucky, it could have been a lot worse.

"This happened to us and we are sensible people, imagine it was children who were playing about with them. There are no warnings on the product or anything like that.

"Apparently there are flame defenders you can buy to prevent this happening, so why aren't they being sold with all bottles of this kind?

"I love candles and fairy lights, but I would never dream something like this would happen.

"The nurses were great and really went the extra mile, thankfully she doesn't need any extra treatment."

However, Grace revealed she is also struggling mentally with what happened. She said: "I have trouble sleeping and I keep having dreams, it's difficult it will take time to get back to normality.