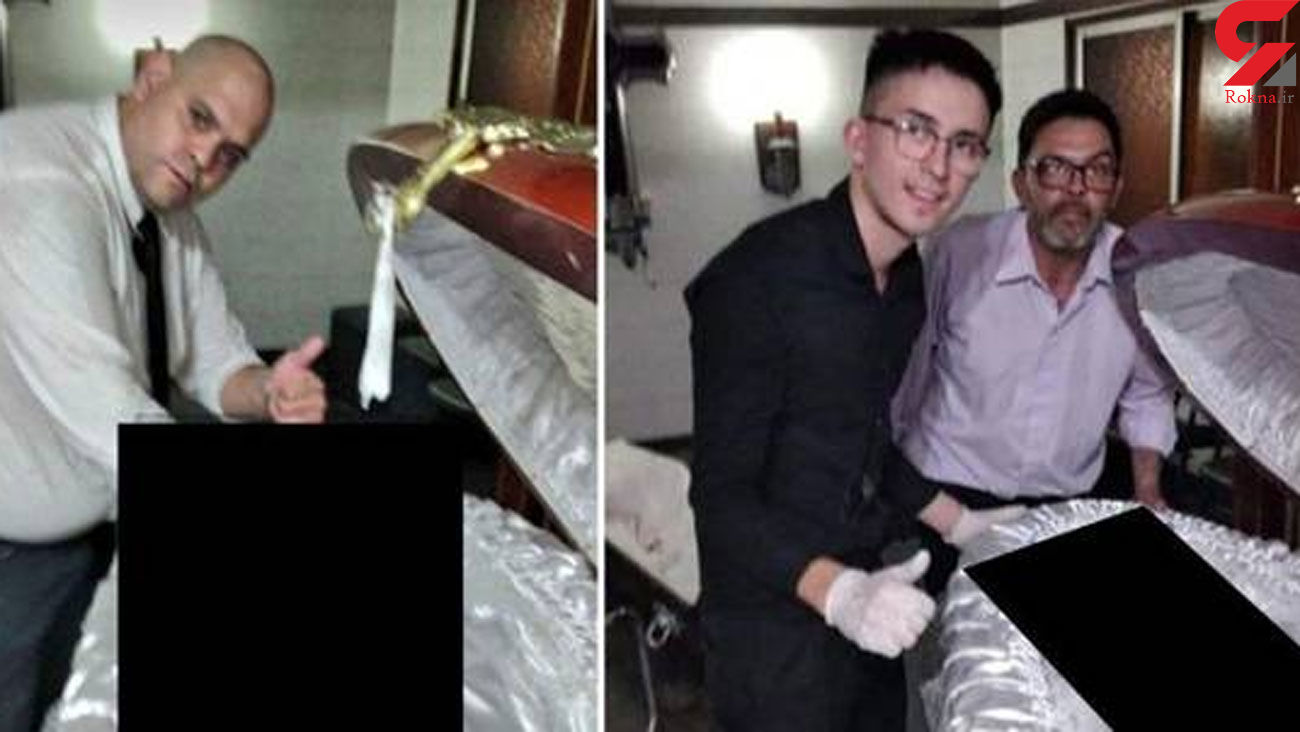 The first of the photos began circulating on Thursday and sparked threats of legal action by Maradona's lawyer Matias Morla.

He named the man at the centre of the scandal as Diego Molina and it later emerged he had been sacked by the owner of the funeral parlour, a firm called Sepelios Pinier.

Pictures subsequently emerged of a father and son repeating Molina's thumbs-up gesture by the open coffin, with the younger of the pair even appearing to smile.

Local reports said they too had been fired by their distraught boss.

They were subsequently named as Claudio Fernandez and his son Ismael, 18.

Today Claudio begged for forgiveness in the first comments by any of the trio since the scandal broke.

He told an Argentinian radio station: 'We were getting ready to take Diego to the wake and my son, being a typical youngster, made the thumbs-up sign and had his photo taken.

'I ask for everyone's forgiveness. I've worked for Maradona's father and his brother-in-law.

'I know a lot of people have been very offended and have taken it badly. I know it upset them.

'I ask all of them to forgive us.

Mr Morla named the first sick selfie culprit as Diego Molina and posted a social media picture of him on his official Twitter feed as he pledged to take legal action.

He wrote in a menacing message alongside his tweet: 'This is Diego Molina, the author of the photo taken beside Maradona's coffin.

'Diego Molina is the swine that took the picture of himself alongside Maradona.

'For the memory of my friend I am not going to rest until he pays for this aberration.'

He published his message before the photo of the other two men by the coffin started circulating.

Molina was one of the men trusted with preparing the footballing legend's body ahead of the private open-coffin wake for family and friends earlier today. Maradona died of a heart attack aged 60 on Wednesday.

A new photograph has emerged of Molina standing up in a van leaving the morgue in Buenos Aires following an autopsy ahead of Maradona's body being transported to his state funeral.

After a private open-coffin wake, the casket was closed for the public send-off at the presidential palace as scores of fans lined up to pay their respects.

Scuffles broke out in  the capital today as fans jostled to see the coffin - which was covered in an Argentinian flag and Maradona's signature number 10 shirt after it arrived in an ambulance early this morning.

Since his picture was shared to social media, funeral worker Molina has been sent death threats from furious fans. Some have called for him to be stripped of his Argentinian citizenship.

Owners of the funeral parlour Sepelios Pinier confirmed to local media that the worker has lost his job.

One Maradona fan who saw the picture wrote: 'I want this fat baldie who took a picture of himself by Diego's body dead. I want him dead. DEAD.'

Thousands came to say farewell to their hero at the presidential palace in Buenos Aires, where Maradona's casket is lying in state for three days.

Scuffles broke out as fans jostled to get inside and see the coffin, which was covered in an Argentinian flag and Maradona's signature number 10 shirt after it arrived in an ambulance early this morning.

A long line of mourners streamed past Maradona's body, clapping, pumping their fists and throwing flowers, flags and football shirts at the foot of the casket, on the first of three days of national mourning in Argentina.

Regarded by some as the greatest player of all time, Maradona combined awesome footballing ability with a flair for showmanship and a turbulent personal life marked by drug and alcohol problems.

Lawyer Matias Morla claimed today that Maradona was left for 12 hours without aid at some point before his death on Wednesday, which came two weeks after he had brain surgery to remove a blood clot.

'It is inexplicable that for 12 hours m