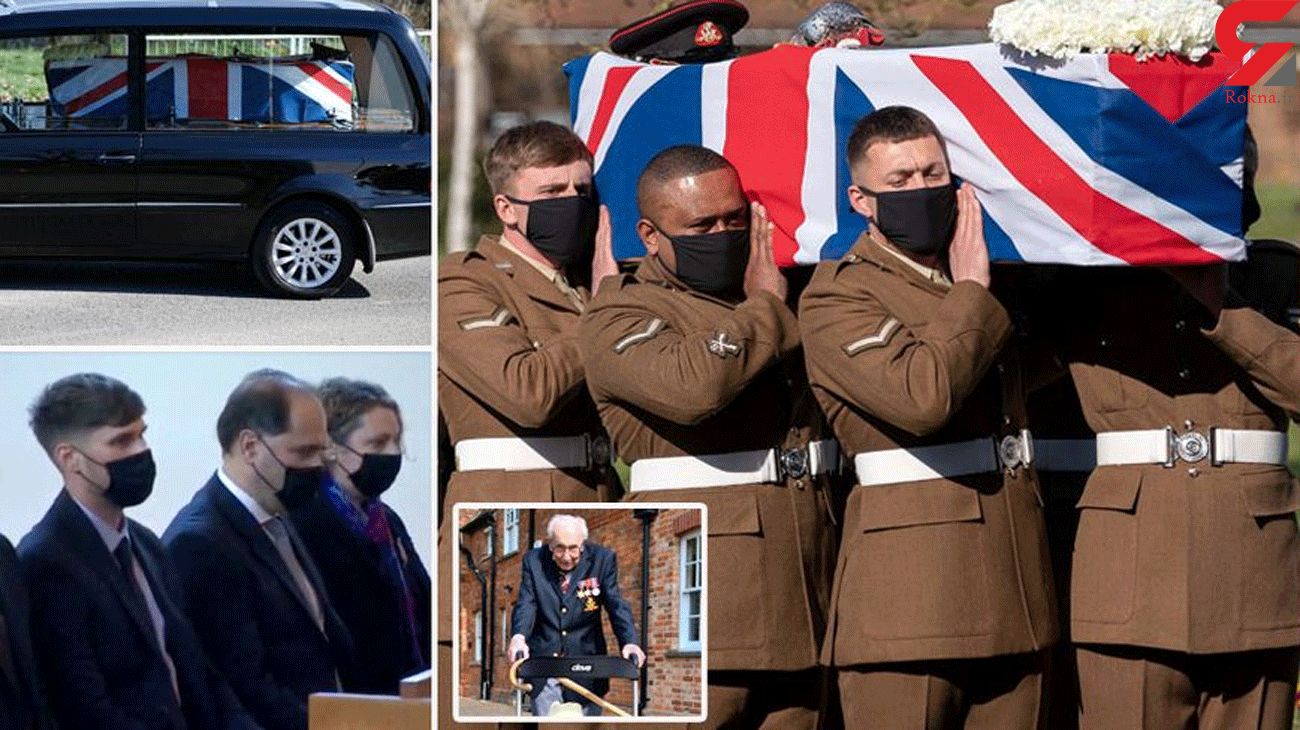 Captain Sir Tom Moore has been laid to rest surrounded by eight members of his family in a "spectacular" but private funeral.

His two daughters, four grandchildren and sons-in-law walked into the crematorium at around 12pm behind a coffin draped with a Union Jack flag.

A C-47 Dakota plane from the Second World War then soared across the sky overhead before a three-gun salute to the veteran and fundraising hero rang out.

The coffin was carried in by soldiers from the Yorkshire Regiment, who made Captain Sir Tom an Honorary Colonel in August, and the ceremony started with his charity single with Michael Ball, 'You'll Never Walk Alone', being played.

Captain Sir Tom captured the hearts of the nation during the first lockdown by walking laps of his garden and raising more than £32million for the NHS.

He sadly passed away in hospital aged 100 earlier this month after being diagnosed with coronavirus, prompting an outpouring of grief across the nation.

The celebrant conducting the funeral said: "It's quite incredible to think that 163 countries donated to (Sir Tom's) fundraiser - that's almost the whole world.

"As wonderful as we think our NHS is, people from other countries really aren't going to be interested in our health, so it seems obvious to me that they were really investing in Captain Tom and the values he stood for.

"He was a proud British veteran and a gentleman, he lived in a multi-generational environment, not only would that have kept him young, but also symbolises the importance of family to him.

"What sacrifices did he and his peers make in defence of our freedom, a man with a strong moral compass, a strong work ethic, a sense of pride and an indomitable spirit.

"He serves as an inspiration to us all to never give up and always stay strong knowing tomorrow will be a better day."

She said: "Daddy, you always told us 'best foot forward' and true to your word that's what you did last year, raising a fortune for the NHS and walking your way into the nation's hearts."

Ms Teixeira added: "Daddy, I am so proud of you, what you achieved your whole live and especially in the last year.

"You may be gone but your message and your spirit lives on."

Captain Sir Tom's grandson Benjie added: "If there is a lesson I have learned from living with you the last 13 years, it's the power of positivity and kindness, I truly do not believe I would be the person I am today without your sound guidance.

"Our chats mid-afternoon that were only supposed to last a few minutes quickly turned into hour-long conversations, quickly delving into so many thought-provoking avenues. These are memories I will never forget and ones I am incredibly grateful to have.

"I can't imagine how many pieces of my sports equipment would have stayed broken without your ever-trusted super glue.

"I suppose the tables turned in the later years when so often it was Georgia or me fixing something on your phone."

Ms Ingram-Moore, Captain Sir Tom's other daughter, said that the world had become "enthralled" by her father's spirit of hope, positivity and resilience.

She added: "We are so proud of the way you handled everything that happened.

"We have been so close as a family before this but we were thrust even closer together as the world became enthralled by your spirit of hope, positivity and resilience.

"They too saw your belief in kindness and the fundamental goodness of the human spirit."

Captain Sir Tom's family had urged people to respect lockdown rules and stay away from his funeral, but still promised a "quite spectacular" farewell at Nurse Road Cemetery, Bedford.

His coffin could be seen passing through the village of Marston Moretaine this morning, with well-wishers lining the roads to clap.

Just eight relatives attended the ceremony, with church bells to ringing out across Britain at the stroke of midday in tribute.

Soldiers from the Yorkshire Regiment carried Captain Sir Tom's coffin to the crematorium, with a firing party, a bugler and a ceremonial guard also forming part of the service.

Captain Sir Tom served with the Duke of Wellington's Regiment during the Second World War, which later merged with two others from Yorkshire, becoming the Yorkshire Regiment.

The firing party each fired three rounds in unison, with six representatives from the Army Foundation College forming the ceremonial guard.

The funeral ceremony ended with 'The Last Post', played by Alex Browne of the Yorkshire Regiment Band.

Away from Bedford, the deputy Lord Lieutenant of West Yorkshire, David Pearson, has today laid a wreath in Keighley - Sir Tom's birthplace - on behalf of the Queen.

Wreaths of poppies were also laid by local MP Robbie Moore and the town's mayor and mayoress, Peter Corkindale and Clare Abberton.

Captain Sir Tom was made an honorary freeman of Keighley last summer when he said "it really is great to be back" as he watched a plaque unveiled in his honour.

Mr Corkindale said: "He had put Keighley on the map. He's made this town into what I always knew it was, which is a town full of people who are caring, who care about the welfare of others.

The mayor said Sir Tom had lived in Keighley for 50 years and promised that "without doubt" there would be a proper celebration of his life once Covid restrictions were lifted.

Mr Corkindale said: "Knowing Sir Tom, he wouldn't want it for him, he would want it for everyone who's lost their lives in this pandemic."

He said there were plans for a statue of Sir Tom in the town and also some form of award for school children "so, going forward, people will always remember Captain Sir Tom Moore - a Keighley l

There are plans to plant trees around the world in his honour following the funeral, with his family hoping that the 'Trees for Tom' initiative will result in a wood in his home county of Yorkshire and the reforestation of part of India

Daughter Lucy said previously: "My sister and I have been creating the funeral that my father wanted.

"He was very clear in his wishes and if he could have been put into a cardboard box, he would have done that, rather than chop down a tree."

She said she had received many messages from well-wishers ahead of the funeral, and that it was "wonderful" to see people writing in an online book of condolence.

His family added that they will inter his ashes in Yorkshire, with his parents and grandparents in the Moore family plot, once coronavirus restrictions allow.

Captain Sir Tom's 100th birthday celebrations last year featured a flypast from a Spitfire, with the hero pictured punching the air as the plane went overhead.

Defence Secretary Ben Wallace said of the funeral: "In national emergencies ordinary people do extraordinary things and inspire us all to pull together to overcome adversity.

"Few will have heard of Sir Tom before this crisis but his contribution and example now lives on in us all.

"The armed forces are immensely proud to contribute to the celebration of his extraordinary life of service."Follow the Official Rokna NEWS Telegram Channel For More and fresh NEWS.